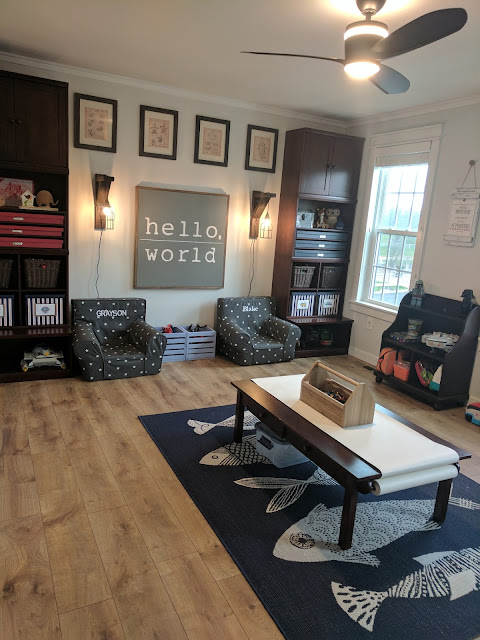 Did you hear that?  That’s the sound of me letting out a big sigh that I can check this room off my list!  My original plan was to tackle this room right after the boys bedroom last summer – but truth be told I was pretty burned out and decided to change gears to the living room instead…..and it was actually a blessing in disguise!  My goal was to make this room a place where the boys could feel free to make it their own, but still make sure it fit in with the rest of the house because it’s right off the loft – not tucked into a basement or a unseen corner of the house, and stepping back for a bit helped me accomplish it. 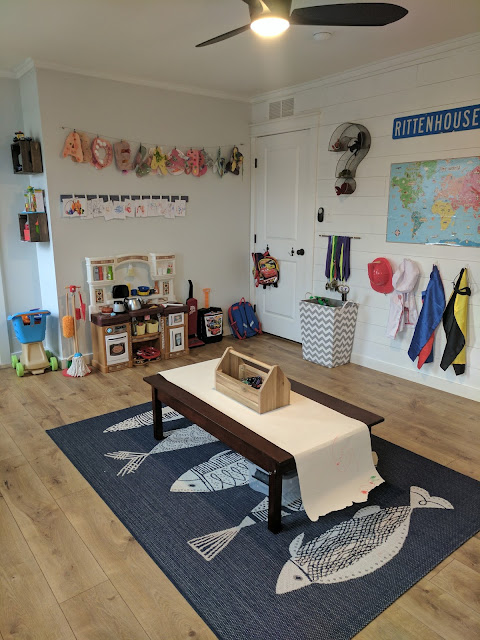 I did still want the two rooms to relate to each other so they’re both painted Nebulous White by Sherwin Williams, and they share a lot of the same colors and finishes, but I hadn’t really been sold on the plan I had for the room, so instead of going full steam ahead, I started to move the boys toys in and let them start to play in there and that’s where I learned my 1st lesson – if you’re going to tackle a playroom, make sure you pay attention to how your children play!  It think a lot of us moms (at least me) dream about a wonderful playroom filled with pretty wooden or color-coordinated toys that our kids keep in darling storage containers……….but snap back to reality – kids toys are probably the least visually appealing and hardest to store things EVER.  But by watching my kids play in the room for a few months I was able to figure out a lot of different ways to give them plenty of space to play the way they want, and also make it easier for us all to clean up when they’re done. 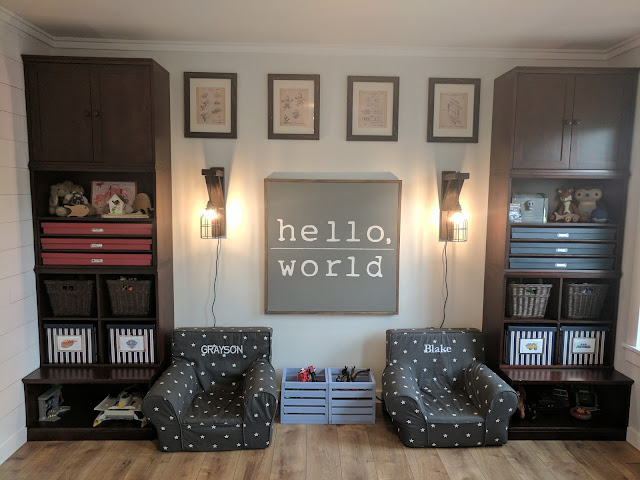 The room itself is really big – too big for a bedroom for one little kid, which in part inspired us moving them both into the smaller room.  It’s also wonderfully bright due to three windows that face the front of the house.  The first place I started was on the back wall with the built in storage.  The two big towers consist of pieces from the Pottery Barn Kids Cameron Storage system.  We had these in our basement at the townhouse, and have re-organized them a few times.  I love that they have so many different options, and the bottom pieces are really deep so they’re perfect for storing bigger toys (because again, hardest things to store EVER).  Down the road, if our oldest son wants to move back in this room, I can keep these two towers in place and easily plop a bed down in the middle. 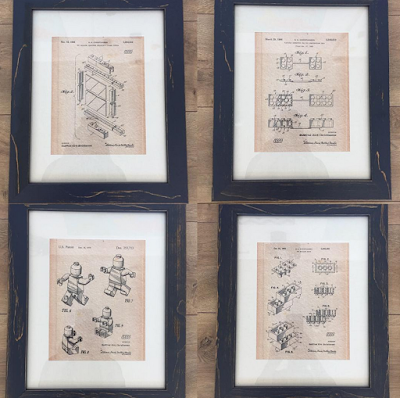 Once those were in place, I knew I wanted to make the middle portion a feature wall because it’s the first thing you see when you walk in.  I moved in the two chairs (also from Pottery Barn Kids) and added some artwork – the small frames hold a group of Lego Blueprints that I got off Etsy, and the “Hello, World” painting I made myself (a request from our software loving daddy).  The sconces I made using these plans from Shanty – 2 Chic, and the small blue toy crates on the ground I made as well (if you follow me on Instagram stay tuned because I’ll be offering some options for sale very soon!) 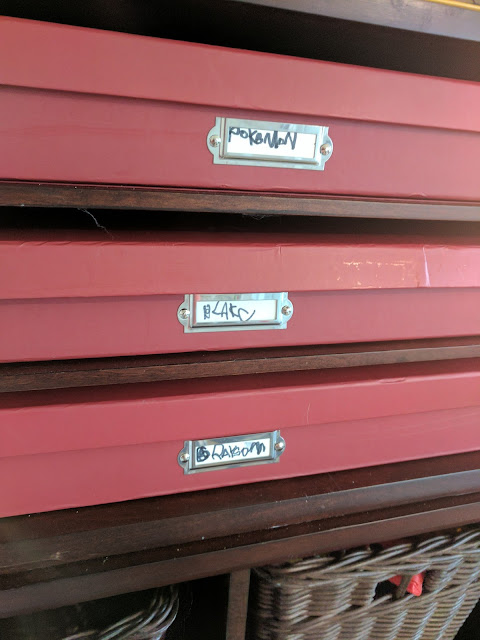 One of my favorite things is the labels that Blake added to the storage boxes one day – “Blake”, “Pokemon” and “Grayson” (which he figured out how to spell by looking at his chair) 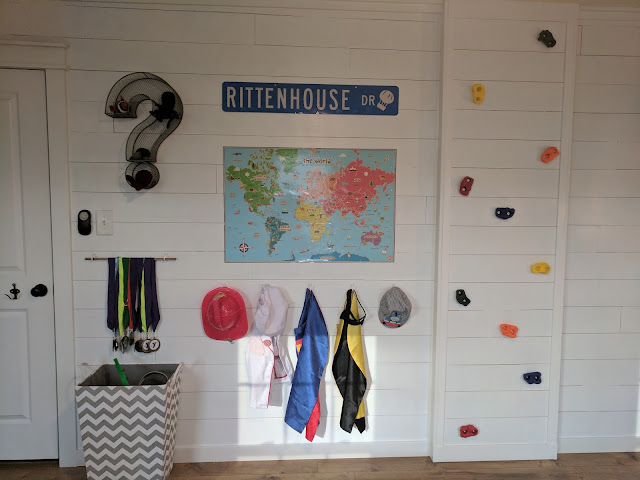 The other big under-taking in this room was the Shiplap / Climbing wall.  Like the boys room, I knew I wanted to add Shiplap in here and this wall is exactly opposite the one in their room…it also had a drywall seam starting to show so “two birds”.  The Climbing wall was my husbands “you know what would be cool” idea that I ran with.  It took more time to plan this thing that it took to build – after looking around Pinterest for a while I figured out that I just needed to frame out a section and basically attached the wall to that.  It is incredibly sturdy and can hold both Jon and me so I feel 100% confident that the boys can safely climb it. 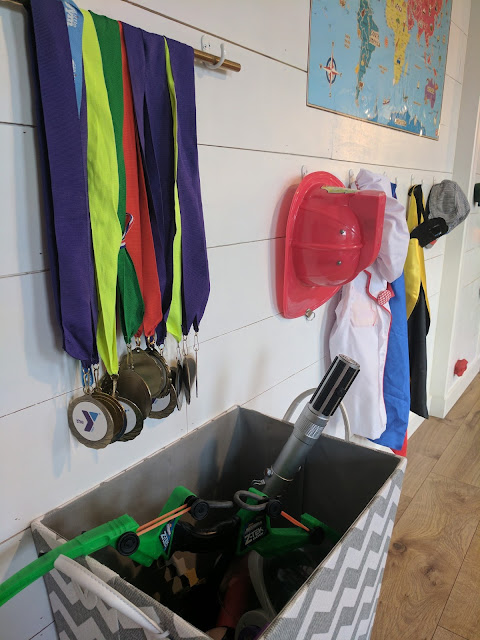 I just added some simple hooks to the wall (and a big basket from HomeGoods) to hold our dress up stuff and the boys medals.  The question mark shelf I found at Michaels last year, the map is a write on decal that my dad got the boys so they could track him on his travels, and the street sign a neighbor of mine offered when I said “hey you know what fill that space nice – an old street sign”. 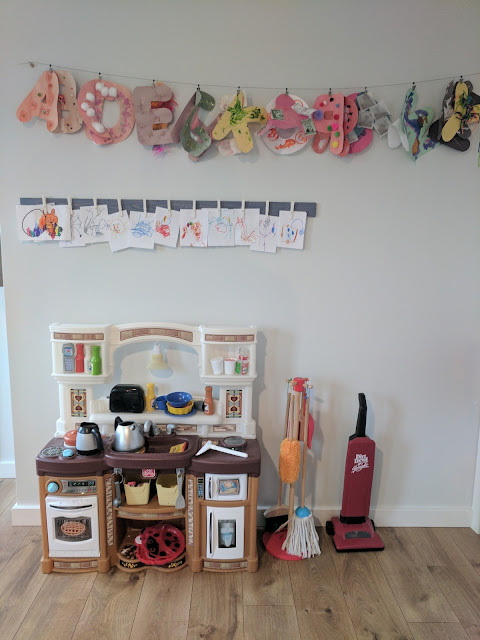 Wall #3 is our “Art Wall” / Kitchen – Lesson #2, have an art wall….kids love being able to display their artwork proudly!  My boys also love pretending to cook – I thought they had lost interest in this thing, but after I made it much more accessible they are back to serving me bowls of fruit salad and sandwiches made out of doughnuts and lettuce.  The Alphabet Blake made a few years ago and I just love it so much! (the hanger I got off of Pottery Barn Kids a while back but I think they still have a version of it)  The bottom piece I made out of scrap wood and some clothespins painted white – Blake is obsessed with Pokemon and those are his some of his many many drawings of them. 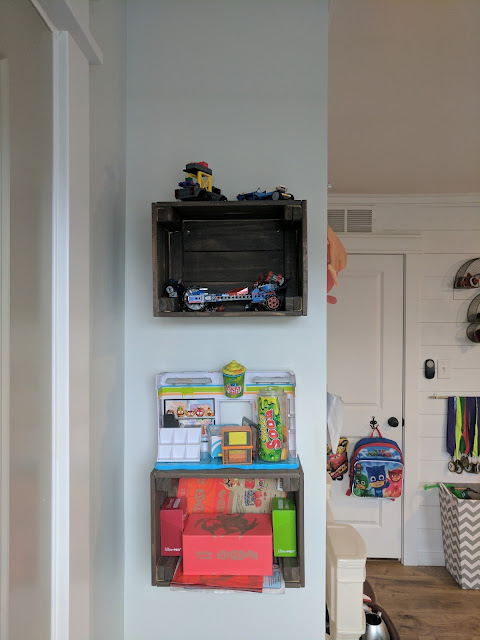 On the little corner of this wall I hung some crates that I got from Ikea – I had Blake show me how high he could reach and then hung these just high enough so that he could access them, but his little brother can’t.  They hold even more Pokemon, his Grossery Gang toys (boys right!), and his Lego creations.  I didn’t take a picture of it, but the closet I also turned into toy storage by adding some extra shelves (including the one I took out of the laundry room which miraculously fit perfectly).  In there I keep a lot of the bigger toys, and a TON of extra baskets and bags because Blake has an obsession with sorting things into different containers. 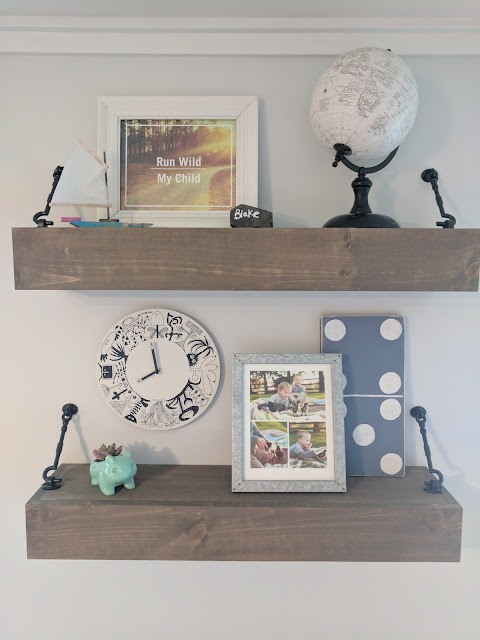 The last wall is the window wall;  just like the other rooms, I’m adding Window Trim and Crown as I go along.   I wanted to be able to see something besides toys when you first walk in, so I built a variation of floating shelves (again from plans from Shanty-2-Chic) that feature these cool looking hooks.  I have them styled out right now with some favorite things that I’ve been collecting (including that adorable little Bulbasaur succulent planter that Blake will be getting for Easter on Sunday..shhh!) but in the future I imagine this can be a space to store trophies or other awards. 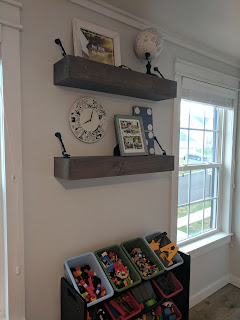 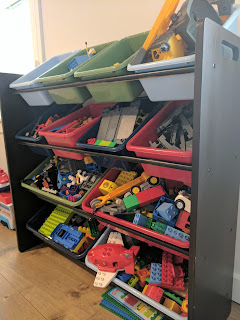 The storage rack underneath is a hack I just have to share.  This is actually your basic storage bin rack (mine’s from Target) that usually just comes in a tan color.  I used my favorite Espresso colored Gel Stain (which I also used in the boys bathroom) and some black spray paint and PRESTO!  storage rack 2.0!  I think it would also be so cute to do a pink + white version, and you could even add some stencils to the outside panels. 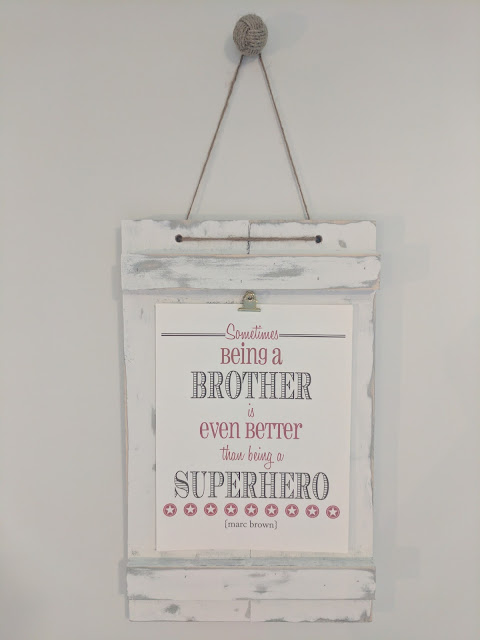 I also added this saying (the frame and the print out are both from Shanty-2-Chic) which I had come upon ages ago and thought was super appropriate. 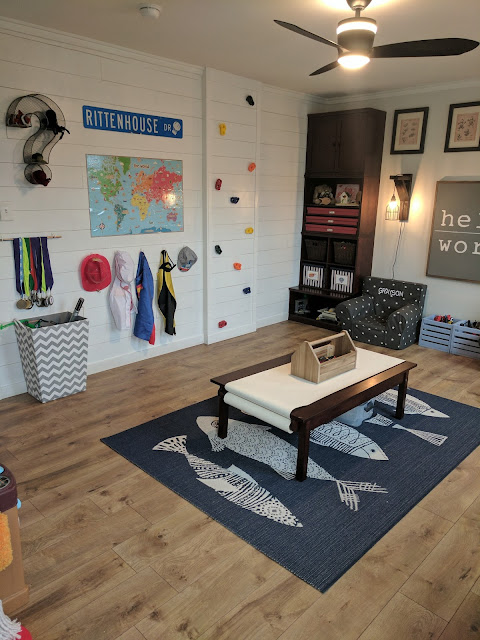 In the middle of the room is their play table – it’s also from Pottery Barn Kids and I love it because it has a place on the end to hang a roll of paper, and it also comes with longer legs that you can attach as they get older to make it taller.  The rug in the middle is an Outdoor rug from Target that I bought last year and it makes me laugh every time I see it.  The wooden toolbox I got from Ikea with the idea of storing crayons in it, but as you can see Hot Wheels overtook it.  I also have to give a shout-out to my dad for coming through big time and adding a ceiling fan/light that we really needed! 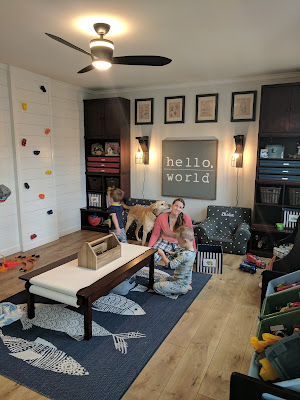 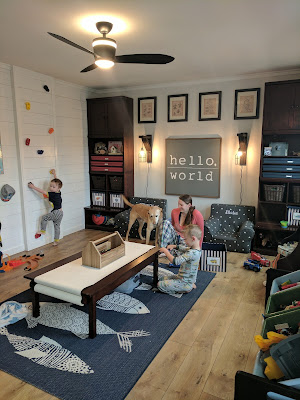 Of course right after I finished taking pics the boys, and the dog, all had to bust in (and then lick my face).  Even though I did some putting away (and some much needed cleaning) before taking these pics I really didn’t style anything differently than how we keep this room on a daily basis.  I usually have a “family clean up” on Sunday night and we put everything back where it’s suppose to go.  My boys like to play with all of the same type of toy at once – if we are gonna play Hot Wheels we’re going to play with ALL of the Hot Wheels – so having them sorted totally works for us but may not float everyone’s boat.  Lesson #3 (at least for my family) – if you give everything a place, the mess is more likely to get cleaned up. 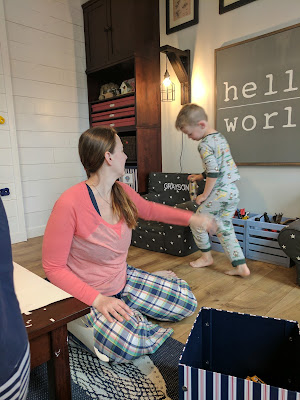 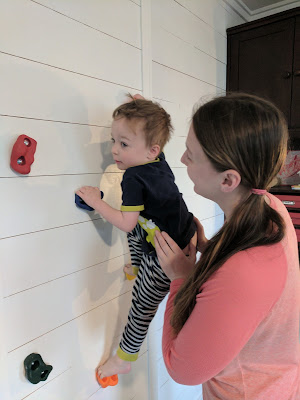 A lot of times I feel guilty for spending so much time worrying about things that are (let’s face it) pretty trivial in the scope of what’s going on in the world right now, and believe me that fact is not lost on me.  When I talk to my husband about it, though, he told me that while that’s true, I’m spending my time making our home a place that makes him and the kids incredibly happy and that’s something to be proud of.  When I am sitting in the loft and I can hear the boys playing in this room and letting their imaginations roam free instead of just spending more time in front of the iPad, I think back to that talk and know he’s right.

I’m going to be taking the next month to work on projects for some “clients” which I’m thinking of sharing in one big post – and I’m also excepting a super special delivery in the next week that I can’t wait to tell you all about!  I hope everyone has a wonderful Easter (or just enjoys the long weekend!) I for one am going to soak in all the good weather I can : )